This week we’ll talk a little bit about the setting of Aril. The basic concept is that there are different factions battling over a newly grown universe. Each of these factions has their own color and ruler, called an Overlord. An Overlord is not really important for the gameplay, but basically the Overlord is like a king you fight for. 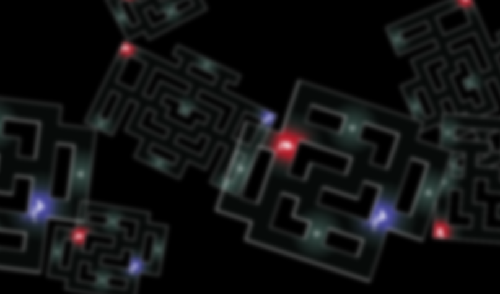 Every map you play is a different battle taking place in this universe, and you can see other battles taking place in the background of your game. When battles are won, that part of the world belongs to the winning faction. The ultimate goal of the Overlords is of course to control the most territory in this universe, and each Overlord has their own personal reasons for wanting control. In the game, you can see how much of the world belongs to a specific faction.

There are certain parts of this universe that can assemble units to defend or attack with, but these need energy. Luckily, the territory you’ve taken over is also a source of energy, emitting light once connected to a Rana. The more energy is supplied to a Rana, the faster it can work. This allows for faster assembling and thus more control over the battlefield. However, each faction supplies a different kind of energy, disrupting the energy flow of other energy sources. This way it is possible to cut off the energy supply of a Rana causing it to work slowly.

So all things considered, Aril is actually a fairly violent game. All around you battles are taking place, and little of the enemy is left standing once you’re victorious. The player is like a commander assigned to a specific battlefield. If you are often victorious, you will be assigned to more difficult battles. If you do not win as much battles, you will fight easier battles. The story is not really intense, but it works for a multiplayer game with a lot of replayability.